NEW ORLEANS – (Dec. 17, 2019) – Blue Bikes is celebrating two years of rolling around the Big Easy by revealing data on how strongly New Orleanians have adopted the successful bikeshare program and announcing details on the upgrades and expansion riders can expect in the New Year.

Whether wheeling to work, heading out with friends or just having fun, locals and tourists alike have made the most of Blue Bikes. Since December 2017, more than 66,000 Blue Bikes riders have:

“While everyone rides for different reasons, the system mirrors our city, and bikes are located in a growing number of neighborhoods to meet different needs – from City Park to the CBD to the French Quarter to Central City,” said New Orleans Mayor LaToya Cantrell. “In 2020, we look forward to bringing more, upgraded bikes, to deliver this new transportation option to more of our residents.”

With the rapid growth of Blue Bikes over the last two years, parent company JUMP is investing in an expanded service area and upgraded electric, pedal-assist bikes - which will give more New Orleanians access to Blue Bikes and help further expand transportation options.

The new JUMP Blue Bikes feature an e-assist that provides a boost (up to 20 mph) every time you pedal, which makes biking more accessible to a wider range of people with different abilities and ages while being used for longer distances.  JUMP has seen e-bikes generate more than twice as much usage as pedal-only bikeshare, and JUMP e-bike trips average 200-300 percent longer than traditional bikeshare trips.

In 2020, Blue Bikes will expand its service area to give even more people access - including students at four universities, Xavier University, Dillard University, Loyola University, and Tulane University - while allowing current riders to leverage the pedal-assist in traveling to more parts of the city.  Blue Bikes will be expanding in these neighborhoods:

“As one of the initial proponents for a bike share program during my first term in office, I am thrilled that Blue Bikes will be expanding its network to include more sections of the City.  I’m particularly excited that this will include portions of Algiers, increasing our connectivity with the Eastbank,” said Kristin Gisleson Palmer, New Orleans City Councilmember, District C.  Providing high quality mobility options for residents is a critical element of New Orleans’ progress, and today’s announcement puts us a step closer to achieving that goal.”

Riders will also benefit from a new, improved JUMP mobile app and the ability to rent bikes directly through the Uber app, since Blue Bikes and JUMP joined the Uber family last year.  With more modes of transportation in one place at your fingertips, it becomes even easier to get around without a car.  Riders with an existing Uber account can simply log into the new apps, or you can create a new account after downloading the JUMP or Uber apps.  With JUMP products now in nearly 30 cities globally, you will be able to get around just as easily when traveling to those cities as you can when at home in New Orleans - and tourists from cities like London, Berlin, San Francisco, and Austin will be able to seamlessly ride Blue Bikes when visiting New Orleans.

“Over the last two years, we’ve introduced more and more people in the city to bikeshare, and I am thrilled that all of our dedicated riders will soon experience the benefits of e-bikes - getting across town faster without breaking a sweat,” said Geoff Coats, Blue Bikes General Manager.

A higher-quality bike with an electric battery that requires regular charging does have an increased cost so that New Orleanians will be able to travel further, faster.

New Orleanians can expect the transition to e-bikes and the new apps to come in late January, with the expansion to new service areas coming in the following months.

About Blue Bikes
Blue Bikes is a fast, convenient and affordable transportation system for residents and visitors to move around New Orleans. The bike share program is a partnership among the City of New Orleans, JUMP Bikes and title sponsor Blue Cross and Blue Shield of Louisiana. Learn more at bluebikesnola.com.

About JUMP Bikes
JUMP is a bikeshare startup that has operated Blue Bikes in New Orleans since the system launched two years ago.  JUMP also launched the first ever electric bikeshare system in the United States.  In May of last year, Uber acquired JUMP as part of its mission to expand the menu of transportation options available within the Uber app, and make it even easier for residents to get across town without relying on their own personal vehicle.  Learn more here.

With our subsidiaries, HMO Louisiana and Southern National Life, we provide group and individual health insurance plans, life and disability insurance, group voluntary products and administrative services to one out of four Louisiana residents. Blue Cross and Blue Shield of Louisiana also provides Medicare supplement and Medicare Advantage plans and is a partner in offering the Healthy Blue Medicaid Managed care plan. Louisiana is the only state where we operate, with offices in every major region to serve our customers. 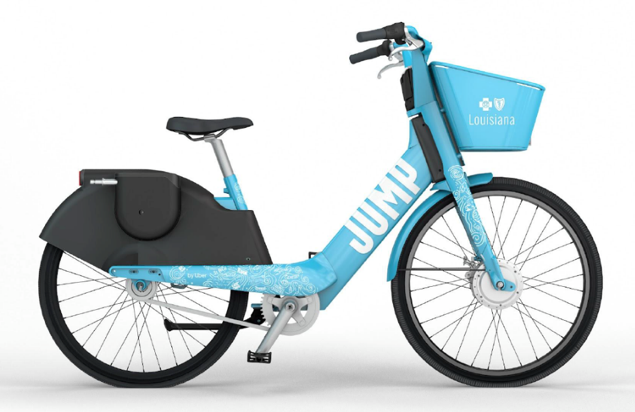